The Most Widely used Motors with an Unbeatable Price/Performance Ratio

Air-cooled motors are and will remain the most widely used electric motors in the world. They are cooled by the transmission of heat to the environment via the motor case – this is the cheapest form of cooling.

As a general rule the following points represent the disadvantages of air-cooled motors. The motor should be regularly cleaned and maintained otherwise the motor's performance will deteriorate over time due to dirt and deposits. The fan noise is often perceived as annoying and the heat from the motor is discharged into the immediate environment.

We recommend the use of air-cooled motors primarily in a relatively clean environment in which neither waste heat nor noise will be perceived as notable sources of disturbance. It is in these environments that SERVAX air-cooled motors can fully prove the unbeatable superiority of their unrivalled price/performance ratio.

SERVAX offers all the air-cooled technologies – synchronous, asynchronous, with a copper or aluminium squirrel-cage. 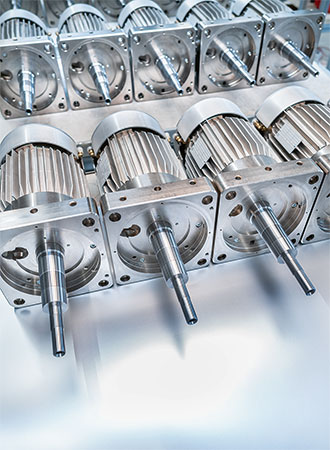